I don’t often read historical fiction, I’m even less likely to read American historical fictions – it’s just something I don’t know very much about. However, it’s always liberating to read a book I wouldn’t normally pick up and find out that I enjoy a new category of fiction. So when The Glovemaker came my way, I was intrigued.

Low in the canyon, a tiny town called Junction is home to a collection of families. It should be a place of relative safety. But this place attracts those hiding from the state’s Marshal and his deputies, those people who practise polygamy – and when the those people arrive Junction is no longer safe.

We follow the arrival of one such man in the late hours of a January evening. The snow is deep in Utah and it’s unusual for a Saint – as the Mormons call themselves –  to arrive at this time of year asking for refuge. This is where we follow Sister Deborah and her neighbour Brother Nel as they attempt to pass the Saint to a safe place. However, it’s not long until the Marshal turns up…

It took me a few chapters to get into the rhythm of Weisgarber’s writing, but her style soon gripped me into following the life of this tiny town. I was pulled into the description of canyon country; of the deep snow and harsh land. Weisgarber’s strong characters are driven by resilience and determination – but they must answer their own moral questions along the way.

There’s a clear depiction of the hardship women face; Sister Deborah’s character is as obedient as you’d expect to find in 1888. And it makes you realise how far women (and feminists) have come from the days of doing what you’re told. It’s clear Deborah doesn’t want the risk of a man on the run hidden in her shed, but because her husband is away from home for work (does that sound familiar?) she’s unable to say no. She has no spokesperson and she’s unable to give her opinion – something I think Weisgarber portrays well.

The majority of the novel takes place in a 48-hour time period and the urgency of the events makes for a pressing read. It took me a week to make my way through the 290 pages (and it would have been quicker if a hardback book was more commuter-friendly). The novel switches between narrators – Sister Deborah and Brother Nel take turns telling their own version of events alongside their internal struggles of self, religion, and righteousness.

In Weisgarber’s author notes I got a snippet of the research that went into The Glovemaker – Junction was real, as was the passage to Floral Range where the on-the-run Saints looked for safety. The end result is a work of fiction that cleverly intertwines history to make this story not only believable but feel real too.

This review is part of The Glovemaker‘s blog tour. The Glovemaker by Ann Weisgarber was published on the 22 February 2019 by Mantle an imprint of Pan Macmillian. To see more thoughts from bloggers, take a look below: 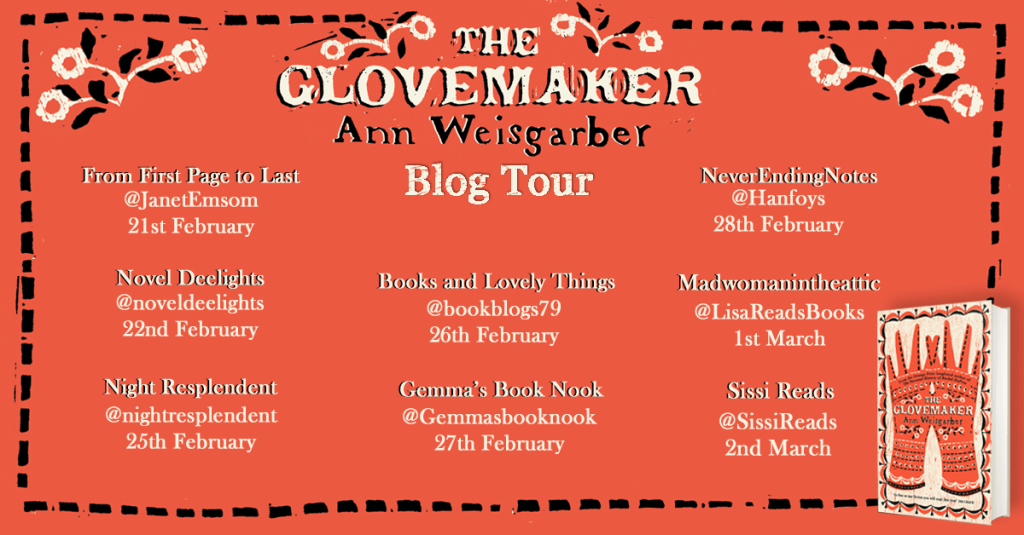